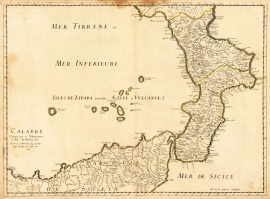 I’ve added a short section on the Aeolian Islands to a sub-section of the Mythic Genoa pages, “The Tyrrhenian Sea”.

Written in the style of a geography section from a Tribunal book, it includes some gazetteer details of the various islands with ideas for linking them into ArM5 Sagas.

The most immediately apparent link is perhaps with “Fortunata’s Island of Bound Spirits” in Legends of Hermes, but several of the volcanic islands may provide useful bases for “The Burning City” concepts presented in Hermetic Projects.

I’d originally planned to detail Corsica and Sardinia, the Tuscan Archipelago and other Tyrrhenian sites in a similar fashion, but my aim is not to write a Tyrrhenian Sea Chapter of a revised Rome Tribunal Book, just to provide material to aid in a Genoa centred Saga or to support stories involving the Genoese.

The concept of a novel “Tyrrhenian Tribunal” based around a collection of coastal and shipboard covenants is appealing however – the definition of Tribunal being 12 magi across 4 covenants or something similar… maybe I’ll delve into this further in future.