I’ve just uploaded and completed my first contribution to Vaults of the Order, the so-called “Hermetic Museum” project byTimothy Ferguson detailing a collection of interesting and unique items for general use by the ArM5 community.

Not unexpectedly, my first contribution involves jinn, well an ‘afrit to be specific , but the point is jinn are something I’m interested in, have already written about and have a bit of a reputation for jinni related material these days.

(I did write Chapter 4: The Jinn in The Cradle and the Crescent supplement after all).

END_OF_DOCUMENT_TOKEN_TO_BE_REPLACED

So Ben MacFarland (one of the US based ArM5 line authors) presented the authors of Faith and Flame with a bit of a present today – he used his Google Glass to record the “unboxing” of his newly arrived copies and flicked through them slowly so the non-US authors (CJ and me basically) could have a look at the artwork. You can’t see the actual text clearly so it’s apparently legit from Atlas Games’ point of view but you can make out the layout.

I’m very thankful to Ben for his efforts – simply put the maps (by Matt Ryan) are amazing and I particularly enjoyed the artwork in my Arelat chapter. Good to see some new interior artists and I particularly liked the Lou Carcohl by relative newcomer Christian St Pierre (who was responsible for the lovely “Siege of Mistridge” piece that graces the cover).

Go see the dedicated “Faith and Flame” thread over at the Atlas Games Forums for more comments as we continue to discuss the supplement.

My copies still haven’t arrived in Oz sadly… even the line editor, David Chart, who lives in Japan usually gets his copies before me here in the Antipodes. 😦 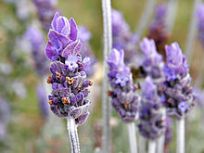 This concept was eventually watered down to an insert of the same name, the Pralician character Lavandarius and some details on Lavender of Virtue.

Lavandula or lavender is such an iconic symbol of modern Provence that I wanted to be able to include it somehow in the Arelat section but without it being too anachronistic. This attempt lead to a whole lot of research into medieval herbalism, the reputedly magical classical properties of lavender in ancient Greek medicine and investigation into the local folk magic of Provence.

As I’m a unabashed “hedge magic tragic” from way back, some sort of allied collective of subsidiary Cunning-Folk / Folk Witch style herbalists seemed a logical concept to develop further, particularly for a covenant like the Coenobium where the Jerbiton magi style themselves as living in good taste (hence the perfumes, fine pastries, sauces and spiced wine) and the Redcap contingent has need for a plethora of useful minor magical items.

I’d always considered Hermetic enchanted devices as quite powerful for Redcaps (although arguably important from a meta-game perspective) and wanted to explore the potential of Redcaps relying on hedge magic devices as it seemed more authentically medieval in flavour. More on this perhaps in a later post…

The following article collects some of this material cut from the Arelat drafts:

I’ve just posted the first supplemental material for Faith and Flame over at the relevant page.

Originally the Redcap Sicart the Leper was intended for inclusion in the book as a potentially ally of new characters, but I didn’t feel comfortable statting up various Companion characters initially (I hadn’t written my “Training Packages for Redcaps” article yet). I then ultimately ran out of time.

This character concept came from reading ArM3 A Midsummer Nights Dream, the classic “Four Seasons Tetralogy” adventure supplement set mainly in the Val du Bosque that begins with the infamous Provencal Tribunal meeting  of 1207 set at the ancient covenant of Dois… oh, hang on we can’t mention the trademarks of other companies now can we? END_OF_DOCUMENT_TOKEN_TO_BE_REPLACED

So I’ve been thinking more about Deep Ones now I’ve rediscovered my ArM5 books during the recent move, including the latest of the 3 “Shadows Over Innsmouth” anthologies edited by Stephen Jones (the second volume cover is pictured to the right). I’ve managed to look over some of the notes on concepts I scribbled down in response to the Fomorach material in The Contested Isle.

As mentioned in a previous post,  modelling Deep Ones in Mythic Europe presents certain challenges, but the consensus is that portraying them as a type of Magic Human (and their hybrids as Magic-kin) is the best way to mesh the established Mythos concepts with the default Mythic Europe paradigm. I’m still keen to explore portraying the fish-frogs as Faerie creatures to suit some story concepts but I’ve therefore developed Deep Ones as a form of Magic Human in the following article :

END_OF_DOCUMENT_TOKEN_TO_BE_REPLACED

Well, this is the supplement where I had the opportunity to present my influence on Redcap culture for better or for worse, but unlike other Tribunal Books (except perhaps Against the Dark) this also book addresses the role of Gifted Mercere in the culture of House Mercere.Erik was responsible for the high Mercurian concepts of Aedes Mercuriae and the Gifted Mercere archmagus Ophilo, whereas Ben developed Guillermo, the Herculean Hero Cultist of Ara Maxima Nova. There was originally a third Gifted Mercere character, the Islamic merchant magu Saggitus of the Coenobium but we felt three detailed Mercere magi in one book was too many given the small number in canon.