So I’ve been thinking a lot about inserting Mythos elements in other settings lately and the IKRPG setting of Immoren seems an appropriate candidate – in fact, there’s a section of southern Cygnar, Fennmar Province (detailed in Kingdoms and Gods, pages 71-72) , that has many of the elements of so-called “Lovecraft Country”, including a reasonable fit for the probable location of the legendary town of Innsmouth. The location is marked with a star at the edge of the swamp nestled off the seldom used main road from Clocker’s Cove to Mercir at the edge of the Trollkin and Gatorman controlled swampy peninsular that juts to the east into the expanse of the Gulf of Cygnar.

A Matter of Correlation

There’s a number of reasonable correlates that make this a suitable option both from a thematic and meta-game perspective. By example, the following map is from Chaosium’s Escape from Innsmouth supplement details so-called “Lovecraft Country” based on the are of Cape Ann, Massachusetts: 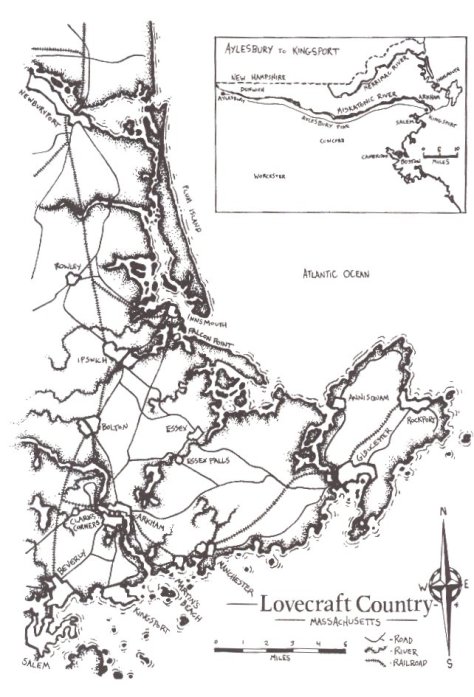 Rough geographical correlation with the shape of the area helps, with Cape Ann being represented by the swampy peninsular jutting east, although the scale is much smaller on the Immoren map, with Innsmouth-in-Fennmar located about 50 miles south of Clocker’s Cove rather than 8 miles south of the equivalent town, Newburyport in Massachusetts. Equating the large southern city of Mercir with it’s stronghold of the Fraternal Order of Wizardry as the area’s substitute for Boston is easy enough.

The distance makes it just over a day’s travel by carriage or wagon to this version of Innsmouth, suggesting that most travellers must stop overnight at the village of Rowley rather than using it as a staging point before continuing through the marsh towards Mercir or on their way to the unnamed riverboat station that is used to access the Great Cygnaran Observatory to the southwest, itself a useful substitute for Arkham’s Miskatonic University in terms of story hooks involving scholars.  Innsmouth-in-Fennmar then becomes a half forgotten town off the main road, accessible only by those willing to travel into the night and stay an evening in the swamp girded estuary settlement…

So I’ve been thinking more about Deep Ones now I’ve rediscovered my ArM5 books during the recent move, including the latest of the 3 “Shadows Over Innsmouth” anthologies edited by Stephen Jones (the second volume cover is pictured to the right). I’ve managed to look over some of the notes on concepts I scribbled down in response to the Fomorach material in The Contested Isle.

As mentioned in a previous post,  modelling Deep Ones in Mythic Europe presents certain challenges, but the consensus is that portraying them as a type of Magic Human (and their hybrids as Magic-kin) is the best way to mesh the established Mythos concepts with the default Mythic Europe paradigm. I’m still keen to explore portraying the fish-frogs as Faerie creatures to suit some story concepts but I’ve therefore developed Deep Ones as a form of Magic Human in the following article :

END_OF_DOCUMENT_TOKEN_TO_BE_REPLACED

I’ve been promising (or perhaps threatening?) this for a while now but I’ve now published the first ArM5 Mythos material here. There’s a lot of fragments and concepts I’d like to explore that link into other sections but for the moment I’ve started in media res with some mechanics for the Elder Sign (see image).

I’ve deliberately  chosen to use cryptic branched line rather than the Derleth influenced pentagram with an eye style symbol.

I’ll be running a poll soon on the Atlas Games Forums to clarify what other elements may be readily adaptable, but will upload some other related material soon.

There’s a story I really like by Peter Tremayne in “Shadows Over Innsmouth“, a collection of Lovecraftian horror stories featuring the icthyic Deep Ones. Titled “Daoine Domhain”, the Gaelic phrase for approximately “the People of the Deep”, it proposes the Deep Ones as analagous to the Fomorians or Fomorach of Irish folklore. The story is set on the island of Inishdriscoll, an isolated community near Baltimore in Cork where a sinister aspect of the Old Ways remains in the form of a ritual sacrifice of an outsider every seven years… but enough spoilers. Read the story for yourself.

So back to Ars Magica. According to The Contested Isle: the Hibernian Tribunal, the Fomorach have long been exiled to the islands off the north coast of Leinster, where they maintain a remnant kingdom ruled by their king.

The ArM5 Fomorach are depicted as a form of misshapen Magic Human linked to the seas, at home in water but suffering when on land, with the more powerful potentially possessing additional magic powers aligned to Aquam (see The Contested Isle, page 119). Their heroes and legendary leaders are portrayed as Aspects of powerful Daimons, further stressing their alignment to the Magic Realm.

Realms of Power: Faerie, page 91 however presents the ancient Abgal variant of mermen, alluding to their underwater cities and tutoring of ancient humans and suggesting that these Faeries may be a response to stories told by sailors about the Atlanteans (Realms of Magic, page 90) or a similar tribe of Magic beings, the apkallu. In private discussion with Timothy, he always intended the Abgal to represent his version of Mythic Europe’s Deep Ones, although they were not specifically presented as such to remain within official paradigm at the time ie. Line Editor: “No you can’t have Cthulu in Ars Magica Timothy” or similar.

Turns out from the sketchy sources that the Abgal are thought linked to the apkallu or “sages”, ancient men-fish from the Erythraean Sea (modern Persian Gulf) detailed in Sumerian myth as teaching mankind the arts of civilisation (and magic). The first of the  apkallu, known as Adapa (or Uanna) was referred to as Oannes and may be synonymous with the Philistine deity Dagon, later equated with the god Marnas of Gaza mentioned in the life of St Porphyry.

Are these opposing depictions compatible?