So a couple of relevant announcements after a long hiatus:

I’d note when I last checked that the Faith & Flame page, with its links to some additional material and my design notes is the most popular page on this blog, so now you can enjoy it even more with the handy PDF version of the supplement and mix in all Sub Rosa content as well!

I often refer to Sub Rosa for inspiration and ideas.

There’s now well over 100 articles written for ArM5 to date. 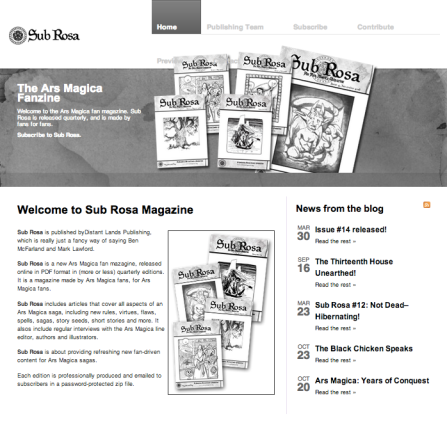 Unfortunately, there wasn’t a collected contents (like the one for its predecessor Hermes Portal found here) or an index, so decided to bug Mark and Ben about it. Although there is some information in the review thread over at the Atlas Games Forums, they both thought it was a good idea.

I understand that indexes take a long time to compile. Then I thought apart from some repetitive formatting tasks, a contents summary is relatively easy to construct, so I decided I may as well just save them some trouble and make one myself.

Click here for the collated contents, which I’ll try and keep up to date as new issues are released and notify the forums when I do an update.

For those of you interested in older fanzine articles, the compiled contents of the 15 issues of Sub Rosa’s predecessor, Hermes Portal (2001-2005, edited by Eric Kouris) can be found here. Although dealing mainly with ArM4, all the past issues have been made available as free PDF downloads and there are a load of good ideas to be found.

Also, I don’t speak French, but if you do or if you employ  Google Chrome’s Translate function you might be able to access the old French fanzine, Ars Mag, (published up until 2001 IIRC, also by Eric Kouris, but the link appears to be currently broken (someone let me know if they have access to these). 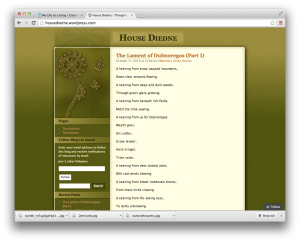 Matt Ryan and Tobias Wheeler, authors of the recent article “The Watchers in Diana‘s Sphere” article on House Diedne in Sub Rosa #13 have announced they plan to update their blog every Friday with new material on the Thirteenth House.


I’ve enjoyed the first two entries greatly and look forward to further entries to come – so head over there and sign up to follow them for updates in the weeks to come!

(And then come back here and browse around – more material coming soon!)