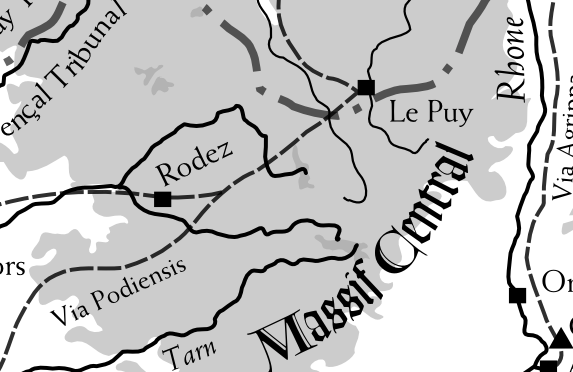 Browsing through my copy of Mythic Locations, I noticed that Mark Shirley’s Chapter 11: The Wolf’s Court is set in the Gevaudan region of Provencal. The area suggested as the default location is centred on the bishop ruled town of Mendes in the east of the region and includes the southeastern portion of the Massif Central and the forested gorge of Tarn River.

The chapter is a great piece in it’s own right due to the anachronistic local legends (see the Beast of Gevaudan, made famous by the 2001 French film, Le Pacte des loups or “The Brotherhood of the Wolf”) but I’m mostly thankful it has drawn my attention to the area from a meta-game perspective.

So Gevaudan is a great spot to develop for a number of reasons, but I’ll admit my interest is mainly because there’s nothing much detailed for this area in the official supplement, Faith and Flame.

Although not intentional, the gazetteer component of the Provencal Tribunal supplement does not detail this fringe area much as not only does the Massif Central region of Mythic Europe fall on the border of Normandy and Provencal, but the hills are found at the edge of the eastern Toulousain, the northeast of the Narbonnais region and over the Rhone from my Arelat section.

As such, none of us (CJ, Ben and I respectively) detailed the area specifically- perhaps this could be seen as an oversight, but I’d like to think of the lack of official development as an opportunity to explore some ideas prompted by Mark’s piece and would propose the region as an excellent place for a player character covenant.

1) There is a forest. There are hills. There are most likely faeries (or at least supernatural creatures). The basic “castle-on-the-hill-by-the-faerie-wood” covenant trope (see ArM5 Covenants, page 7) is therefore satisfied ie. the area provides a vanilla if somewhat unimaginative covenant start in one of the heartland areas of Mythic Europe, as represented by the “Spring in the Woods” Covenant Situation presented on page 26 or ArM5 Covenants. That’s OK, one of the explicit design goals for Provencal was to make it “vanilla” in the sense that it represented the default Hermetic culture of the ArM5 corebook to allow for ease of play, particularly by new Troupes of players (see Timothy Ferguson’s related post on the value of vanilla settings).

2) The somewhat isolated area has no established Hermetic presence – the closest “official” covenant is the Normandy covenant of Atsingani, a vassal of the Tremere led Great Liege, Montverte (see page 76-78, The Lion and the Lily) that wanders the lands to the northwest. The region is also at the fringes of the influence of the Coenobium based along the Rhone in Arelat. This makes it far enough away to escape notice of established Normandy or Provencal factions for long enough for the characters to establish a Spring covenant with it’s own history and personalities without unnecessary interruption by rivals. If required, the characters of a newly settled covenant in Gevaudan can ignore much of the material regarding the contentious upcoming Provencal Tribunal Meeting of 1221, greatly simplifying the initial years of play – the Redcaps of the Coenobium just don’t start showing up until a few years into the Saga.

Alternatively, if the Troupe want to incorporate more established Hermetic elements, a Coenobium sponsored chapter house in the region or a Tremere led expedition (perhaps as a replacement to the ill-fated Lariander of ArM3 Covenants) may make a good backstory for a motley collection of young magi seeking to find their own way in the world. These options provide developed links to powerful allies and the potential to become embroiled in more political stories from an earlier stage.

3) Similarly, locating away from powerful nobles or the influence of the Church allows as much or as little specific Provencal or general Hermetic culture to be introduced as the Storyguide desires, much like the function originally served by the Val du Bosque of ArM3, but without the obligatory interruption of the Albigensian Crusade (although perhaps accomodating some of the fallout of the recent war). The local lord, the Bishop of Mendes can be developed in time as an ally or perhaps as a worthy antagonist using the ideas presented for Bishop Orris in the Antagonists supplement.

4) The woods and hills provide an easy means to introduce mundane, Faerie and Magic creatures familiar to most players from European folklore and medieval stories. As Sara Maitland notes in her book “Gossip from the Forest”, the majority of European fairy stories are set in or involve a forest, so a default forest location allows the Troupe to draw upon existing motifs from the core canon with relative ease compared to the more peripheral Tribunals such as Thebes or the Levant.

It’s too late in the month for me to detail a starting covenant for a November NaGaDeMon style project (see Timothy’s Covenant of Sabrina’s Rest project from last year as an example) and I don’t have the time to flesh this concept out further but I think it’s a worthwhile addition to the Provencal supplementary material I’ve already collected.

Addit: although terribly anachronistic, the Beast of Gevaudan legend (see this short film) and the Le Pact des Loups fantasy film are so laden with Story Seeds and ideas that could be readily adapted to ArM5 that I’ll probably attempt writing some material on it.

While drafting my sections for Faith and Flame I was keen to incorporate some Theban elements into the Arelat section as Massalia (later to be called Marseille) was originally founded as a Phocaean colony long before the Romans arrived to establish the Provincia and subsume the local Greek culture.

We were developing the Cult of Mercury concepts under Erik’s lead and I looked back through my notes for inspiration and found an old idea from the Light of Andorra Saga circa 2008 that I’d worked on for a Gifted Mercere character named Decimus that had been initiated into the Cult of Mercury by his mater, Honoria:

Portus Phlegythas, a watery subterranean covenant and mortuary for the pagan cult that holds a gate to the realm of Hades, located in the deepest stretch of the Verdon Gorge in rivers and lakes. Populated by pallid covenfolk warped by the high Magic aura to be overly sensitive to sunlight. A Mercere pontifex (archmagus) of the Cult, Fraxinus of Mercere, leads the covenant and officiates over the funerary rituals of the crematorium.

It is also home to a small lineage of Ex-Miscellanea Mercurians who specialise in speaking with the departed spirits of antiquity like the ancient Dacian necromantic tradition that joined House Tremere in the 9th century, thereby gaining much lost lore and occasional insights about the future.

Decimus stayed only briefly, long enough for Honoria to prearrange a ceremonial funerary service and cremation in the traditions of the Cult for him – a traditional gift from mater to filius upon being considered worthy of attempting the Hermetic Gauntlet. You briefly met the magi there and made a favourable impression on them, including Acheronus, the Tytalus Titanoi interested in controlling the powerful daemon referred to as Styx, personification of Hatred and Oaths. It’s a very creepy place, even for a covenant-raised pagan like Decimus…

I therefore wrote a short paragraph on the covenant, renaming it Portus Termini and linking it in to the history of the Coenobium by making it the destination of the necromancer survivors of the Saracen depradations of the Alyscamps, the ancient graveyard near Arles. I felt this linked in well with the funerary custom ideas for the Cult of Mercury and wanted to expand on the concept of a parens from the Cult of Mercury purchasing an obol for Charon to “pay the ferryman” well in advance for their apprentice’s ultimate death and Mercurian style funeral.

The potential Story Seeds of a magi’s obol being stolen and used as an Arcane Connection to either their living self or their ghost seemed worth exploring but I didn’t get a chance to develop it as a counterpoint to the Tremere’s custom of passing through the Gate of Eurydice (see Houses of Hermes: True Lineages, page 115 and Against the Dark, page 22 for further details) and as an example of a potential remnant of the non-Tremere Dacian necromancers. Some of the ideas detailed for Qui Sonant Pro Quieto, the covenant that serves as the final resting place for Ireland’s magi (detailed in The Contested Isle, page 105-107) could be readily applied, at the risk of being derivative. I suspect I could link it into the Cult of Orpheus somehow as well.

Another idea that occurred to me later on was to link some of my Terrae magi ideas such as the Sleeping Army (originally derived form a conversation with the former Berklist alumni, David Woods, who wrote the Guernicus chapter of Houses of Hermes: True Lineages) and link it into some of my ideas regarding Petra and the Mercurian and Guernicus involvement with Urbs Rubra.

Unfortunately, despite all this potential, during the writing process we quickly began to run out of room in the Provencal draft however and as I felt the covenant was becoming more “Theban” in style. Erik was leading the Mercurian development in an amazing direction and so I didn’t translate the remainder of my notes into a full covenant description and turned my concentration to other concepts. The sole remaining reference was spotting on the Atlas Forums, remaining as a potential “Easter Egg” clue…

I still think the concept has value as a covenant “between Tribunals” (and perhaps “between worlds”) as such, but rather than being a transport nexus and Mercer House like Harco, it serves more as a destination or a one-off expedition. Making it at least accessible via subterranean waterways gives it the potential to be visited from nearly any geographic are in Mythic Europe potentially reached by the Romans, so I hope I can expand it further perhaps as a fully fledged Sub Rosa piece but more in the style of a “Hooks” or adventure article than just a gazetteer piece.

See the remnant of the original draft text for the covenant:

Despite their prevalence in European folklore, the concept of a werewolf is relatively unknown in the Mythic Middle East.

A Ghul, a member of one of the more evil jinn tribes, often assumes the shape of predators and scavengers such as jackals and hyenas in the tales, but the wolf is a form never mentioned in Arabian folklore as the shape of a shapeshifted jinn.

The Arabic equivalent of a werewolf, the qutrub, is believed to be a form of ghul that can assume the form of a “wolf-like” animal, but specifically stated as never assuming the appearance of a wolf per se. The form is therefore most likely a hyena.

Apparently this is because jinn greatly fear wolves. If I’d known, I would have made more of any potential confrontation between a Tremere with a wolf companion and a sahir with a coterie of jinn servants as a Story Seed… perhaps a lost opportunity.

I stumbled upon this fact only after I completed my final drafts for The Cradle and the Crescent in an excellent source of jinn related material and story ideas: Legends of the Fire Spirits, by Robert Lebling. I really wish I’d found this book earlier, but in my defence it was only published in early 2011. It’s a gold mine of ideas and if it had been available back when I was writing the first drafts I would have used it extensively.

There is however a ghostly spirit, the ‘udhrut, native to Yemen that takes the form of a wolf. Greatly feared by jinn, the spirit is the murdered ghost of an evildoer. In context an evil wizard such as a sahir in ArM5 terms is a potential option and makes an interesting opponent for the jinn minions of the native wizards of the Mythic Middle East…